Once in a while I like a bowl of rice pudding. It’s not a dessert that appeals to me very often but from time to time, for some unknown reason, I crave some. I think it’s a throw back gene from my dad, who adores rice pudding. (Sans raisin, which are the devils fruit!)

Or I might have been craving this because it is sub-zero here and I need cozy desserts. Or it might have been that I had a lot of sticky rice in the pantry and thought this was a great way to use some.I like to mix it up a little when I make rice pudding so I opted for some coconut milk and cardamom. You could use the more traditional cinnamon if you prefer.

I had sticky rice sitting around because Tim & I tackled homemade sushi last weekend. It was super fun and not at all as hard as I had imagined. Not to mention it was yummy! I highly recommend you try making it at home if you enjoy sushi. 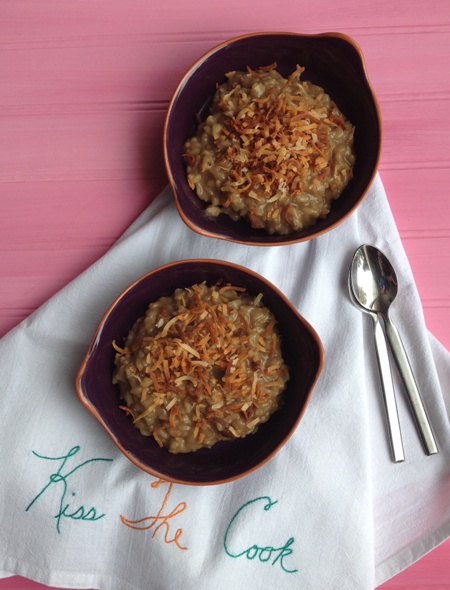 Do you love my adorable kitchen towel in the picture? Homemade with love by my Aunt. Love it!

I am getting sick of the snow. Tired of looking at it. Tired of being cold. Tired of the whole winter wonderland nonsense! So today I tried to have a better attitude about it and enjoy it. Tim & I went snowshoeing. The thing is, this is not the first time we have tried to snowshoe but it’s been brutally cold here. Every time we plan to go the wind whips up and the temps end up being -20 degrees with the wind chill. Because we love our appendages we have opted to skip the frostbite and have just stayed in during all the sub-zero temps.

Today was a heat wave! A whopping 25 degrees. Forty degrees or so warmer than last time we thought about snowshoeing. Off to the state park we went, bundled in our thermal underwear, snow pants & down filled coats. We promptly discovered that snowshoeing is a MAJOR, sweaty work out. We were not cold even a little. We were, however, quickly exhausted and gasping for breath. We pressed on and a couple of miles later felt proud, starving & sore. Yes, already sore. I wonder how I’ll feel in the morning?

It was a killer work out that we now plan to do as much as possible. Hard but very fun and it’s nice being in quiet, snow-covered forest. Of course, if I can’t walk tomorrow I will have to rethink all this snowshoeing.

1/2 cup brown sugar (I used dark but light works, too)

Toast some coconut and set aside to use for garnish when serving. (Good instructions on toasting are here!)

Rinse the sticky rice a couple of times with water and drain. Put rice, almond milk, salt & cardamom in a saucepan. Bring to a boil. Turn heat down to low and cover. Simmer the rice for 10-15 minutes or until most of the liquid has been absorbed. Return heat to medium and stir in the brown sugar and the coconut milk. Bring to a simmer and stir for about 10 minutes until the pudding is thick and creamy.