I wait all year for apples to be in season. Michigan apple season means a vast selection of apples to choose from and because our state is a huge apple producer, it means usually you can get many pounds for not many dollars. Always a plus. 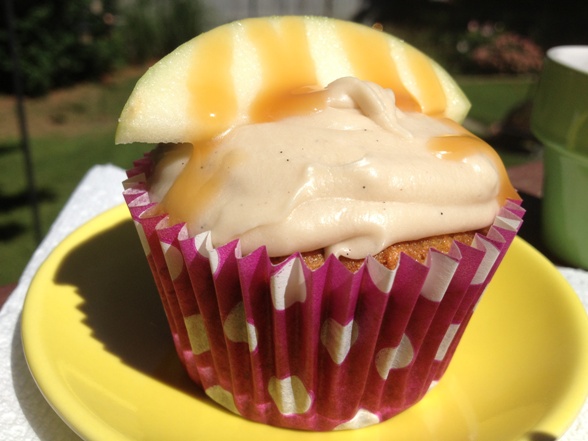 My favorite kinds of apple? Gala, Ginger Gold, Honey Crisp. I also just had some Paula Red’s that were sweet and yummy. I usually like my apples very crispy and a little tart and tangy.In the fall I eat a lot of apples. I bake with them, of course, but the bulk of the apples in this house get consumed fresh out of hand. I enjoy them straight up or with caramel or pb to dip them in. (If case you were wondering how my grandpa probably likes them. . .with room temperature cheddar cheese slices I’m sure.)

I have apple quirks also, despite my fall love of them. (You must know by now, I’m picky. I like what I like. And who I like.) Most of the year I find apples uninteresting. They strike me as a boring fruit and I can take or leave them. Mostly leave.  I never choose the apple cake or muffin if I’m offered. I bake with them only rarely during the bulk of the year. I would choose almost any other fruit over the apple. Until September.

September through December the apple has a special glow about it. And in turn I have a special fall fondness for them.

I love to add fresh chopped apple to my salads. I also add them to veggie trays or serve them with caramel dip and almonds. And although apple pie is my least favorite fruit pie, I will generally make at least one in the fall. Tim loves apple pie so he REALLY loves me when I finally make one. Jackpot!

When I was a kid my mom made baked apples a lot. She would scoop out the apple guts (yup) and stuff them with brown sugar and oatmeal, etc. They weren’t my favorite. I thought it was a sin to make dessert out of fruit! What sort of nut case uses fruit in a dessert.  That’s crazy pants!

Then I got old. I can now appreciate a good fruit dessert. I’ve made baked apples several times in the past few weeks already. If I really think about it, it does seem like an old woman dessert. Which is perfect cause I am an old woman at heart!

Actually, I still fight the fruit dessert. I know I shouldn’t. I know I love them. But, for instance, when Tim and I get ice cream I choose the chocolate-y, gooey, nutty types and Tim orders something like peach or blueberry pie ice cream. Guess what happens. . .I end up sneaking bites of his and declaring him the ice cream winner! Live and learn.

By the way, this is what happens when I try to sit down and enjoy the sunny afternoon, a little coffee and a cupcake. My beagle helper keeps an eye on the situation. You know, just in case.

Shred the apples and set aside. In a large mixing bowl or the bowl of a stand mixer beat together the sugars and butter until creamy. Add the eggs & vanilla and mix well.

Add the flour, baking powder, baking soda, cinnamon and salt. Mix into the butter mixture until combined. Stir in the shredded apples.

Scoop the batter into cupcake tins lined with cupcake papers. This makes 18 cupcakes.  Bake at 350 degrees  for 25 minutes. Allow to cool completely before topping with the caramel frosting.

In a sauce pan bring the butter and brown sugar to a boil, slowly. Once it’s boiling remove from the heat and slowly add the milk. Whisk together and return the pan to heat. Return to a boil. After the second boil is reached, remove the mixture from the heat and whisk in the vanilla and the salt. Transfer the mixture to a mixing bowl and allow to cool about 20 minutes.

After it has cooled off considerably, start beating in the powdered sugar a little at a time until it starts to form a creamy frosting. If it becomes too thick you can add a drizzle of milk to thin it back down or if it’s too loose add a spoonful of powdered sugar. Use the icing immediately. It will harden as it sits.