This is not the most beautiful dish I’ve ever made. Thank goodness it tastes better than it looks. 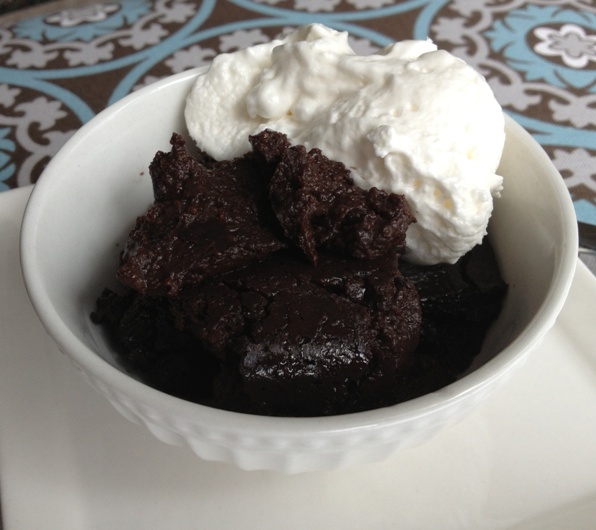 And really it looks better in person than it does in these pictures. I’ve had this problem before. Some chocolate goodies just don’t translate into yummy looking photos.

Rest assured it is yummy.

Indian Pudding, if you are unfamiliar, is a slow baked porridge type dish that was brought over by early colonists. They referred to it as ‘hasty pudding’ and used flour to thicken it. Since flour was in short supply at the time, they adapted the recipe using corn meal which at the time they called Indian flour. It was eaten savory or sweet and could be left to firm up and then fried. In time it became a sweet dish with molasses and spices.

I have made Indian pudding before in a more traditional fashion with the molasses and cinnamon, etc. It’s ugly but delicious.  I hadn’t made it in a long time and stumble upon the recipe the other day when I was digging through some recipe cards. It doesn’t seem like the time of year for heavy fall flavors like molasses so I adapted it and made it chocolate.

I was skeptical as to whether it would be edible. I tasted the porridge right before I put it in the oven to bake and I was not impressed. But like many things, if you give it time and be patient it will come together. This reaches its true delicious peak after it has had several hours or overnight for the flavors to meld.

It solidifies into a dense sort of truffle-like consistency. It reminded me of a flour-less chocolate cake. And even though it was extra delicious when it had some time to age, giving it a few seconds in the microwave before eating made it extra yummy.

So, color me impressed! Not a bit of this went to waste. The whole pan was eaten. That said, it’s rich, so a little serving really went a long way. I think you could easily serve quite a few people with a single recipe. I was happy with a small bowl. Many small bowls over the course of several days, actually!

The molasses version is also good. Sweet and spicy with cinnamon if you go that route. Or in the fall I’ve been known to make a version with pumpkin or squash puree.

I imagine this would be great with a little scoop of ice cream. Vanilla by tradition or chocolate if you, like me, don’t believe in too much of a good thing. I had no ice cream. Disappointing. But I did have Cool Whip so I made do. If you have an aversion to Cool Whip (I have no such aversion) whipped cream would also be tasty. I generally can’t be bothered to whip cream though. Plus it’s mean. 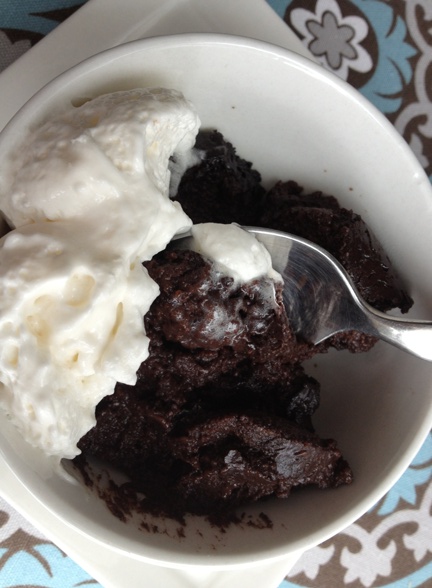 Also, generally speaking I use plain, unsweetened almond milk in most of my baking. If you only have regular milk that’s fine. That’s what most recipes call for. And I see no reason soy or rice milk wouldn’t work. Although I have not tried it so I can’t swear to it.

Prepare a 1 1/2 quart baking dish by giving it a light coat of non-stick cooking spray. Pre-heat the oven to 350 degrees.

Carefully melt the dark chocolate and set aside.

In a saucepan over medium heat, whisk together the milk, cocoa powder, corn meal and salt. Cook, stirring regularly for about 10 minutes or until the mixture starts to thicken slightly. Remove from heat and add the chocolate, brown sugar, espresso, butter and vanilla extract. Whisk until thoroughly combined.

Pour mixture into prepared baking dish. Put in oven and turn oven down to 275. Bake uncovered for 1 hour and 20 minutes. Allow to cool before serving with Cool Whip, etc, if desired.

I ate mine warm from the oven initially and it was good. After letting it set at room temp, covered with plastic overnight, it was even more delicious.