I’m continuing on with my October love affair with pumpkin spice. This also satisfies Tim’s love of marshmallow crispy treats.

These are easy and fun and yummy. Most everyone I know likes marshmallow crispy treats. Except maybe for the one marshmallow hater that I know. You know who you are! And even she might like these.

Speaking of pumpkin, let me tell you about a kitchen failure that I had last week.

I decided I was in the mood for brownies. I love brownies. Fudgy brownies from a mix are fine by me. Whenever I take the time to make them from scratch  they never come out as good as a silly, cheap, boxed brownie mix.

I just happened to have a brownie mix in the pantry. And also some spanish peanuts and candy corn. Sounded like a good mix for a fall treat.

So I poured the brownie mix in a bowl to get to work and realized I had no vegetable oil. Oops. Remember how I mentioned using pumpkin puree as an oil substitute? Well I had a couple of cans on hand and have successfully used it in a cake mix in the past. I thought brownie mix would be no different. Wrong, wrong, wrong!

I used the can of pumpkin, poured it in a pan, sprinkled the top with peanuts and candy corn and popped it in the oven. I was so excited to eat a candy corn brownie.

When I took them out of the oven they looked a little odd. After they cooled Tim and I tried one. AWFUL! They were oddly spongy and yet sort of play dough-ish. Just terrible. Not even edible. I ended up throwing the whole pan out. So sad. 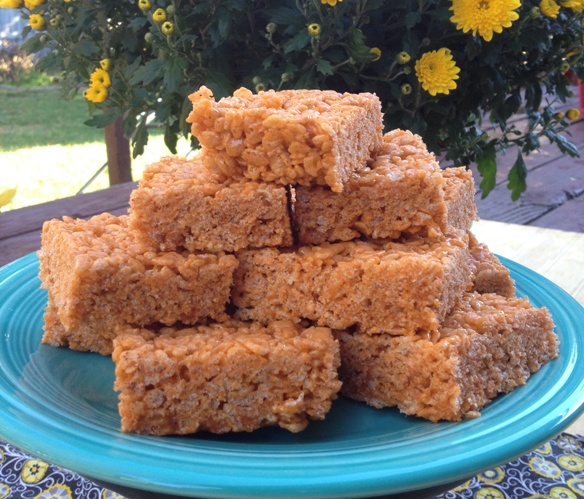 Clearly pumpkin puree does not work in everything. Good to know.

Of course, I made them again after I bought more oil. They were yummy! The candy corn melted and got very chewy. A good combo with the fudgy brownies. Plus peanuts and candy corn always go together. I recommend them if you want a halloween brownie treat.

Another good Halloween treat would be these crispy treats. A crowd pleaser.

By the way. . these are a little more orange than they would be normally. My mini marshmallows had gone bad(who knew that marshmallows could go bad) so I had to use the Halloween themed marshmallows that we bought last week. They are orange colored. You could add a couple of drops of orange food coloring if you want.

On a side note. . .my love affair with pumpkin spice flavored things might be coming to an end. I may actually have almost had my fill. Of course, I bought some pumpkin yogurt today so you never know!

In a large pot melt the butter. Add the pumpkin puree and the pie spice. Let the mixture bubble over a medium low heat for a couple minutes.

Press the mixture into a greased 9×13 pan. Allow to cool and harden for several hours before cutting into bars. Keep in an airtight container at room temperature.