Not to rush you or anything, but I want to talk about 2012 today. New Years Eve is nice and all. . .but lets face it. . in the last few years I have rarely made it to midnight. My bed time is generally much earlier. And if I have a single glass of champagne. . . well, that just speeds up the likelihood I’ll be asleep ASAP. 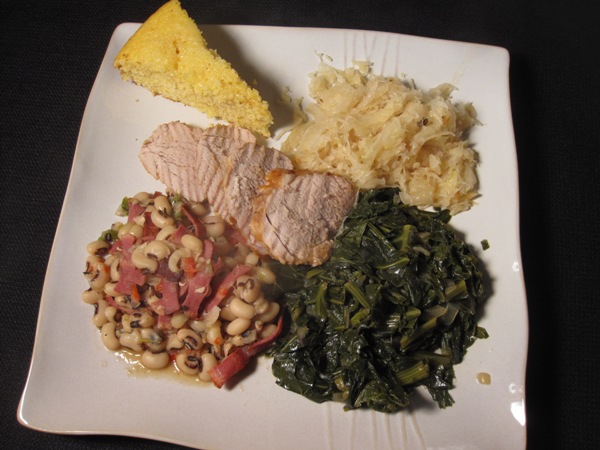 New years day is when I like to shine. I make this meal every year. It’s tradition thanks to my dear friend, Rita.

Rita is the sweetest, most generous Southern lady you will ever meet. She taught me the ways of the New Years good luck meal. (Wax on, Wax off.) Did you know there was such a thing? There is. A Southern tradition more so than Northern, I think. Although many of these foods are considered lucky on New Years in other countries, too. 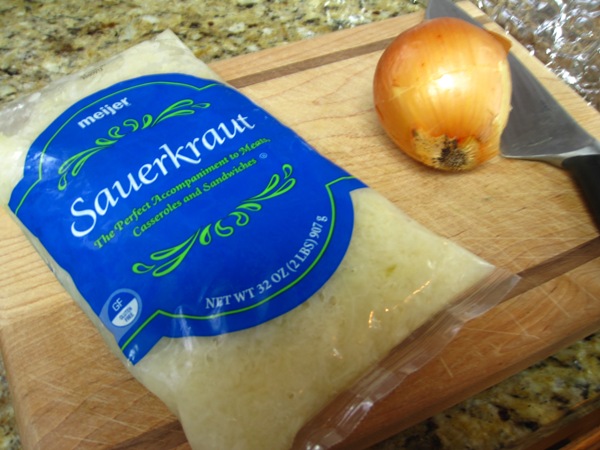 Pork is considered lucky because of the high fat content. It symbolizes prosperity. (Although I like to make a lean cut of pork. . not sure if this negates the luck. I should look into that.) 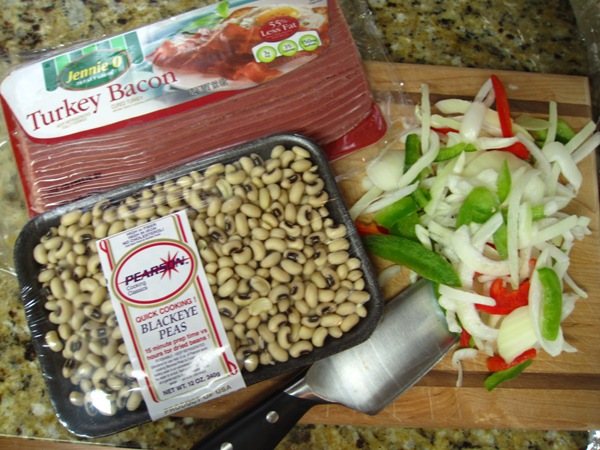 Black eyed peas (often in the form of a dish called Hoppin’ John) (Not the musical group) are considered lucky. From what I can tell after researching it a bit, they are considered lucky because during the civil war a town under attack ran out of food but found black eyed peas to sustain them. There are a lot of other countries that consider a particular legume to be lucky.

Greens are thought to represent money. Some people think the more greens you eat at New Years the more prosperous you will be that year. Different countries eat different greens. In the United States it is usually collard greens. In Germany it is sauerkraut (cabbage). So I make both. Better safe then sorry.

There really isn’t any significance (to my knowledge) to the corn bread but it seems to round out the meal nicely. Plus it is good to sop up all the good juice from the greens and peas.

I’m going to share the peas and the greens that I make. You can make any pork you like. I generally roast a pork loin. 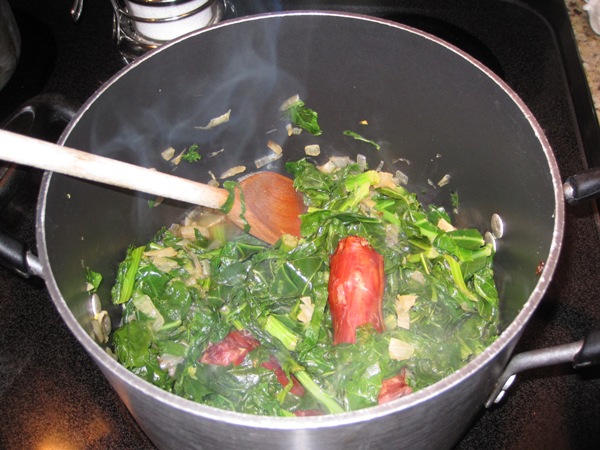 For the sauerkraut I usually just buy a bag of it at the grcocery store (you can find it in the refrigerated section by the smoked sausages). I drain and rinse it. Saute a few onions, add the kraut, heat and serve. It is very salty so drain and rinse it really well before you cook it. 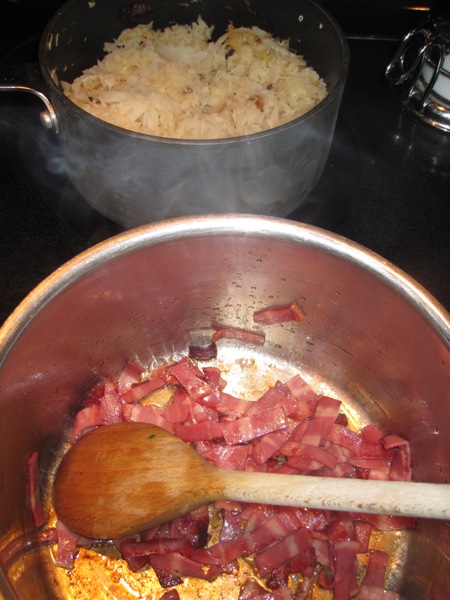 As far as the corn bread goes. . .a couple boxes of Jiffy corn bread is perfect and easy. I usually doctor it up to make it a bit more moist but you don’t have to.  And I like it a little sweeter. I usually either use the mix with a can of creamed corn and an egg and sprinkle some sugar on top, or I used the eggs it calls for but add a few extra glugs of milk and mix in a couple tablespoons of sugar before baking. And I always cook it in a cast iron skillet.

I will always treasure this food tradition. Mainly because I learned it from Rita. I just love her! I love passing tradition down via food. Thanks, my bawdy friend! XOXO

On to the greens and black eyed peas. (My favorite part of the meal, actually.)

salt and pepper to taste

(If you can’t them fresh in the produce section I would use 2 12oz cans of black eyed peas, rinsed and drained.  You’ll also want to decrease the water a little and cut the cooking time down.

Heat oil in pan. Add chopped bacon and cook until it looks crispy. Remove bacon from pan. In the same pan  the bacon cooked in, add the onion, peppers and garlic. Saute until softened. Add the salt and pepper, bay leaf and water. Stir. Add the balck eyed peas. Bring to a boil. Turn down heat, cover and simmer 15 minutes. Stir in the cooked turkey bacon. Add water if the peas have absorbed it all. Cover and simmer for another 20-30 minutes. They will absorb a lot of the water but should remain a little juicy. Add water as needed while it simmers.

(You can use the greens of your choice; collard, turnip, mustard, etc. I used a bag of the pre-washed mixed greens that is a combo of all of these.)

(If the neck freaks you out you could also use a smoked turkey wing or leg, smoked sausage, ham hock, etc.)

salt and pepper to taste (greens can be somewhat bitter)

In a large pot saute the onion and oil. Add the necks and greens and some salt and pepper and the water. The greens will wilt down after a few minutes. When they do you can stir everything together. On a low heat cover and simmer the pot about 45 minutes. Longer if you like.