I am not a fan of red velvet cake. Don’t judge me.

The first time I had it was in my twenty’s after I moved to the south and the cake in question was made with several ounces of red food coloring and lots of Miracle Whip. Ewww.. . it was not good.  I was not familiar with the red velvet cake or people’s deep love of it and that cake made me wonder why anyone ever loved that red mess of a cake. It put me off of red velvet from the start.

I also find that most red velvet has that odd food coloring taste since most people use a liquid coloring that takes 2 or 3 ounces to achieve the deep red color. And as far as it being chocolate under all that red. . . .not so much. There is not enough cocoa in a red velvet cake to actually make it taste like chocolate in my opinion.

In the interest of being open-minded and broadening my horizons I tried my hand at making a red velvet. Blue seemed like a better idea than red though. I had blue food coloring gel in my pantry so I used that. Food coloring gels are very concentrated and you only need a little bit to achieve a deep color.

Even though I don’t ever remember having red velvet cake while growing up, I found a recipe for “Red Cake” in my mom’s handwriting on a recipe card in her recipe box. It is clearly a red velvet recipe. I have no recollection of my mom ever serving us a red cake of any kind but apparently she at least had thought of making one at some point. So I used her recipe and modified it a bit to fit more of what I wanted.

I found this bacon flavored syrup at World Market and had to have a bottle. I knew Tim would find it interesting, too. Then I had to come up with something to make with it. Bacon is an ever popular flavor and very trendy in sweets these days so I decided to make a bacon  icing to use on the cupcakes. 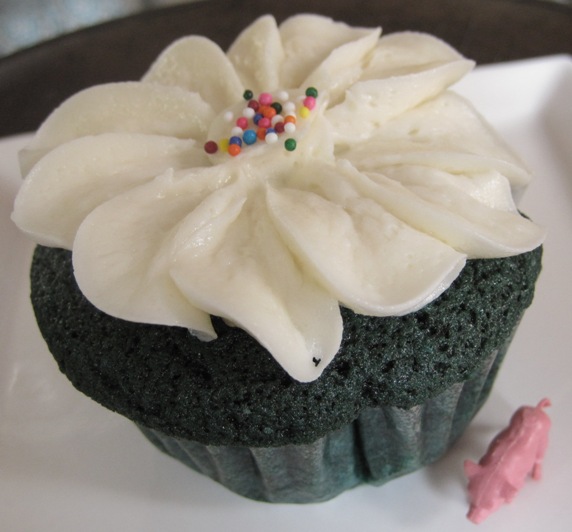 As lovely as they turned out. . I’m still not a fan. I shared with a few friends and although they all thought they were good, I am not impressed. I guess I will just never like the “velvet” cake, red or otherwise!

The bacon icing was interesting. I’m not sure if it was good. . .it’s confusing to the mouth. I do like Vosges Mo’s Milk Chocolate Bacon Bar but in icing form it wasn’t as great as I’d hoped for.  I had some left over salted caramel icing in the freezer and I used that on one of the cupcakes and liked it much better. For you red velvet lovers who adore bacon. . .these might be the best thing you have ever eaten.

Cream the shortening and sugar together. Add the eggs and vanilla. In a separate bowl mix the cocoa, water and food gel.  Add to the shortening mixture.

Dissolve the baking soda in the vinegar and gently stir into the batter.

I got about 21 cupcakes out of the batter but if you really stretch it you can probably get 24.  Bake the cupcakes at 350 degrees for 20 to 25 minutes or until a toothpick comes out clean. Allow to cool before icing.