A quick note on Turducken.

We made one for Thanksgiving this year.  It’s a cajun thing. For those of you who are unfamiliar with this Frankenstein monster of birds, it’s a Turkey stuffed with a duck stuffed with a chicken and the whole thing is stuffed with layers of cajun stuffing. 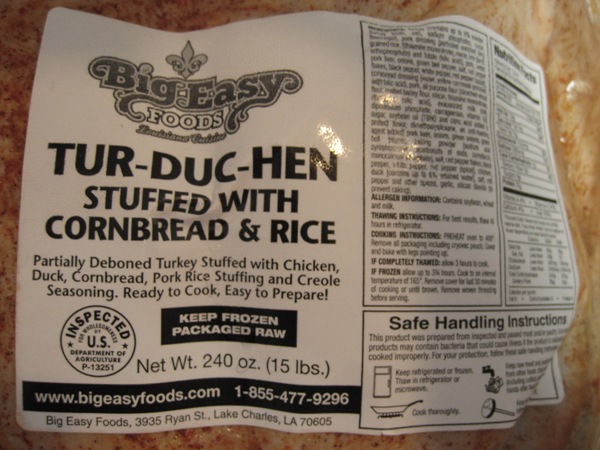 We ordered ours online. No place in Michigan sells Turducken. . imagine that.

It was an exciting thing to try on the first Thanksgiving we combined both my family and Tim’s family.  We followed the package instructions but used an electric roaster instead of the oven.

It’s boneless except for the turkey legs and wings so you can cut through it in big slices.  It was so fun to see the slices after we cut it. And it smelled delicious.

I thought the stuffing was great, the turkey was cooked perfectly. . .but the duck was awful! I am not  duck fan. I think it flavored the chicken and that tasted like duck, too. Ewwww. Not for me. I actually spit a bite into my napkin! Discreetly and in a lady like fashion, of course. 😉

As fun as the Turducken was, I think it’ll be our last. It was an awesome novelty to experience once though! Maybe next year we’ll experiment with stuffing different kinds of meats. . .like a large fish with a small fish with some shrimp! HA!