I love these. I love the cones acting as the cupcake wrappers.

Plus, they bring back nice memories of my childhood and my mom. And, since today is my brother’s birthday I thought it was a perfect time for some reminiscing.

Now, I don’t know if my brother has the same sweet memories of these as I do. I was always enamored with the cupcake cone. They were usually my request for the treat to take to school on my birthday. Mom didn’t make them very often. . usually just for the school birthday snack.

Taking a treat to school on your birthday as a kid was the best! My mom always came to the school and brought something yummy and everyone sang the happy birthday song. It just always made you feel so special at school!

Of course, as delicious as the cupcake cone is, as a kid I was sometimes jealous of those kids whose parents brought store-bought candy or something equally gross for their kids bday. It seemed cool at the time. Now I know better. (No judgement if you’re these parents.) 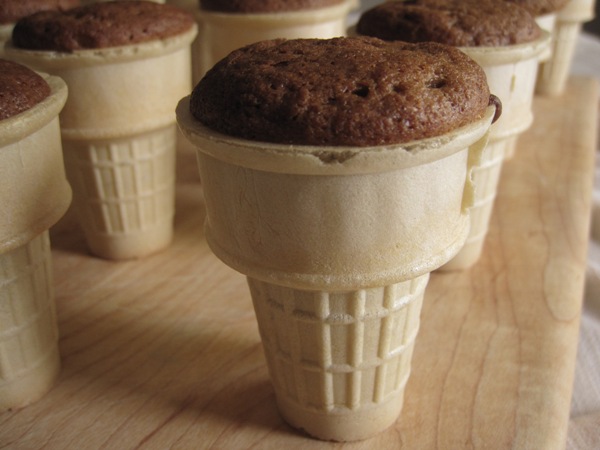 How could I have been jealous of packaged store-bought treats when these were offered up? Kids are just dumb sometimes. 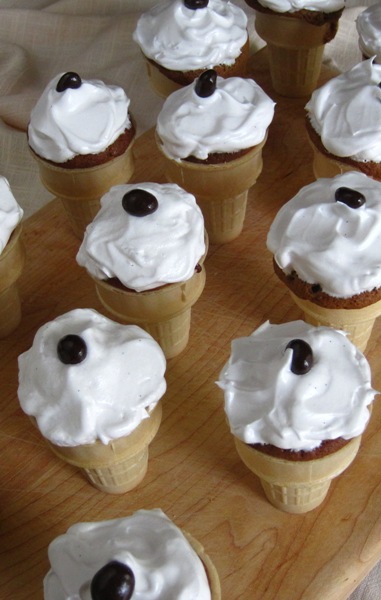 When I lived down south the schools did not allow homemade treats. They HAD to be store-bought. Can you imagine? No homemade treats? Actually, with the state of the world today that might be a good call, but I always thought it would be so fun to take homemade treats in for my own kids. Those kids down there are missing out on the cupcake cone. . . poor kids.

Coffee was never the flavor when mom made them, of course. Vanilla or Chocolate were the standards.

My brother and I are both coffee drinkers in our old age. (GULP. . our thirties!) Coffee seemed like a great flavor to give our childhood treat an adult makeover. Cappuccino seemed even better. . .I mean what dude wouldn’t like to sip on a dainty cappuccino? Especially in cupcake form.

I used espresso in these. You can use very strong coffee if you don’t have an espresso machine. I have this Bialetti stove top version. My husband got it for me last year and I LOVE IT! Best espresso ever!

The batter fills the whole cone as it bakes. You have to be careful not overfill them. They will rise too much before they have a chance to set and the batter will run down the side of the cone. Not only will it be a mess but the cone will deflate a little. A few of mine runneth over. 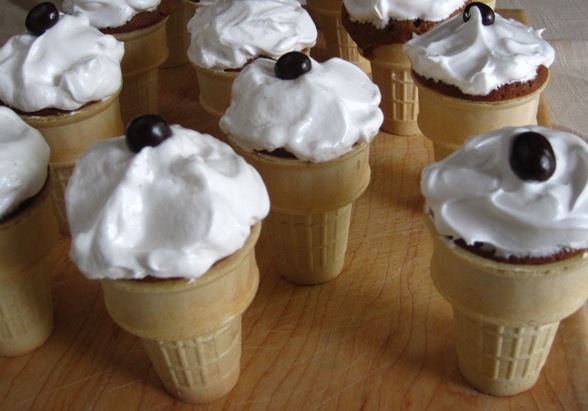 I see these online a lot. (Hello, Pinterest!) A lot of the posts I read about them seem to be written as though this idea was a revelation. A new invention. Who knew my mom was cutting edge back in the 80’s!

I used a whipped meringue icing which looks very ice creamy and topped each one with a chocolate covered espresso bean. . which my little niece said were yummy.

I was thinking these would also be yummy if made in a neapolitan swirl.

I used a muffin tin to stand the cones in and fill 1/2 full of batter. It’s still a balance to get them in the oven without tipping but if they do tip over just stand them back up before you shut the oven door and they will be fine.

Transporting them is another story. They are tall and very top heavy. I took a bakery box and used an Xacto knife to cut evenly spaced X slits in the box. I taped the box closed to give the sides a little stability. Then I pushed the flaps of the Xs down into the box a little and stuck an ice cream cone in. The cardboard kind of gripped the cone and held everything in place for me to take them across town to my brother. Just be careful not to cut the X too big.

1 Tbsp instant coffee (I used 2 packets of Starbucks Via, which equaled a Tbsp)

Mix all the ingredients together except the cones and espresso beans. Place cones standing up in a muffin tin. Fill each cone 1/2 full. Bake at 350 degrees for 15-17 minutes or until a toothpick inserted in the middle comes out clean.

Cool completely before icing. Makes 24 cones. (Plus I had enough batter left over to make 4 regular cupcake, too.)

In a saucepan over medium heat, combine sugar, water, salt and cream of tartar. Bring to a full boil and boil 3 or 4 minutes.

Meanwhile, place the egg whites in the bowl of a stand mixer and whip until stiff peaks form.

After the egg whites are stiff and the sugar has boiled, with the mixer running on a low-speed, slowly pour the sugar mixture into the egg whites. Whip for several minutes until the volume of the icing doubles and gets very shiny.

Frost the cupcakes immediately. Makes enough to frost 2 dozen cupcakes AND a 9×13 cake!